Here we go! So grateful to have had some help in the kitchen this week. Made it so much more enjoyable! Thank you to my mom for some veggie prep on Monday and to my husband for all the help on Thursday and Friday.

All meals served with a simple green salad with carrots, celery, dressed with EVOO and Balsamic Vinegar.

I tripled the recipe and made three sm/med pizzas. It fed three adults, a kid that eats as much as an adult, and two pretty hungry toddlers with nearly one full pizza leftover.  I added a touch of dried rosemary, thyme, black pepper, onion flake, garlic powder and sea salt to the dough and used actual eggs instead of flax “eggs”.

While the crust cooked in the oven, I sauteed the onions a bit first then tossed in the mushrooms, zucchini and squash and seasoned them with sea salt, black pepper, garlic powder, onion flakes, paprika, and chili powder. Once they were cooked, I removed them from the pan, removed the sausage from their casings and sauteed them up. Once done…same thing…removed from pan and then added in the garlic and kale and cooked them in the little bit of goodies leftover from cooking the sausage.

After the pre-cooking of the dough as mentioned in the original recipe, I topped the crust with tomato paste (so simple, but great flavor…I like Muir Glen brand organic tomato paste…and as a note, their cans are BPA free), and then layered on the goodies before throwing it back in the oven for another 10 or so minutes.

We made this a cheese-less pizza and it was amazing, but just for good measure, I added a little cheese to the kids’ pizza (on top of the sauce and under the toppings like a good ol’ fashion pizza). As a final touch, I diced up fresh tomato and tossed them on top of the pizza. 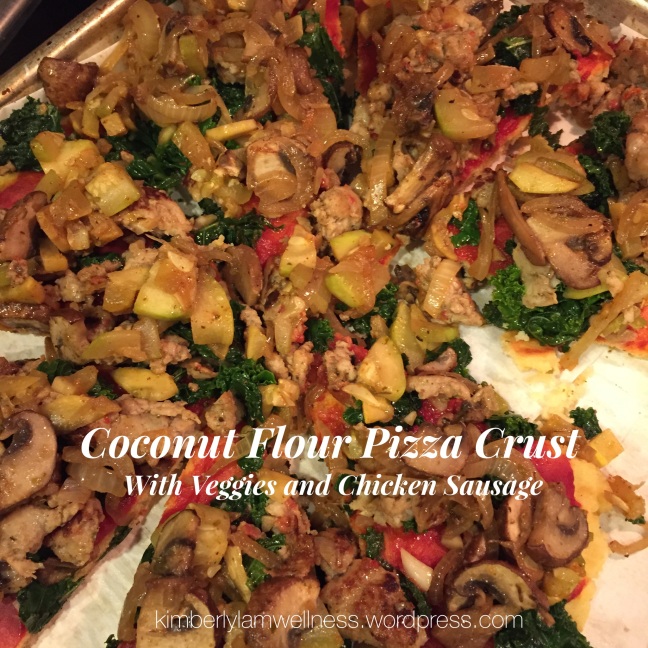 Out the door early today with my little guy to volunteer for a good chunk of the day in his classroom and his school’s library, so Daddy was on duty with dinner prep. He doubled all veggies (and used both rutabaga and parsnips) and used three cans of Great Northern white beans. He also substituted chicken broth for water, added in some bonus seasoning – garlic powder, onion flake, dried thyme and dried rosemary, and used the slow cooker on low for about 7 hours.

The hubs was at it again tonight…This time I was lucky enough to have some time for myself tonight to get some work done while my fabulous husband prepped and cooked dinner AND entertained the kids. Swoon. He used 1.5 times the amount of quinoa and broth, doubled the garlic, added 1/2 a diced onion and some bonus seasoning – garlic powder, onion flake and paprika. Also..super important … we RINSED the quinoa first. We also diced up, seasoned (same seasonings as used in the quinoa), and sauteed a couple of chicken breasts to throw on top. Yum.

Let me know what you think and share a picture and how you liked them, if you give them a try!!